Ten years in the status of an academy. KSMA has celebrated its anniversary(photos and videos) 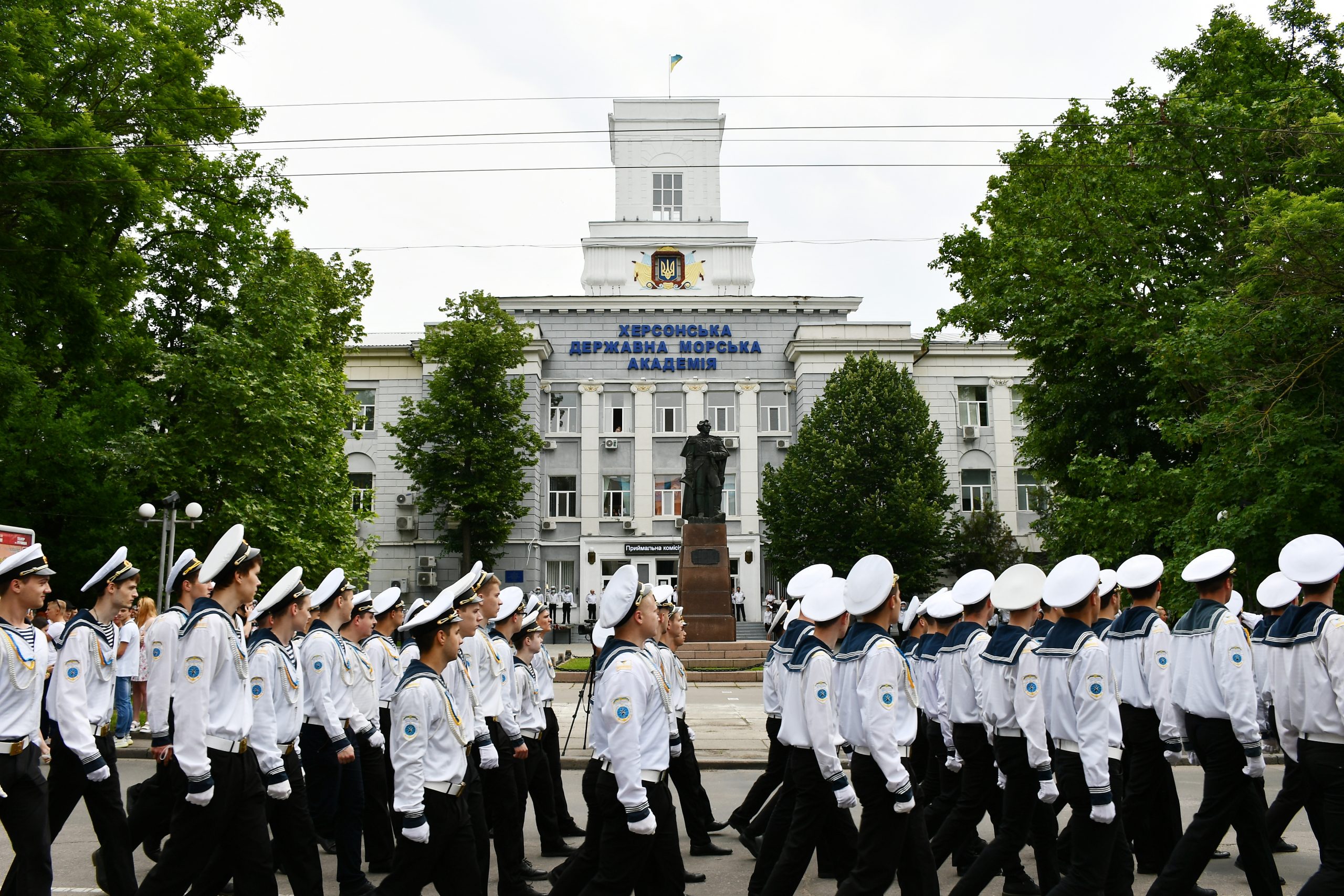 On June 15, 2021, cadets of Kherson State Maritime Academy marched through the central streets of Kherson in honor of the 10th anniversary of the educational institution being awarded the status of an academy. The celebration continued with the line-up near KSMA Academic Building 1 located at                          20 Ushakova Avenue.

Employees and students of the institution, cadets’ parents, citizens and guests of Kherson gathered to commemorate another milestone in the development of the academy, which throughout the years has remained a flagship in the training of highly qualified maritime professionals.

The solemn meeting was opened by Rector of KSMA Vasyl Cherniavskyi. “On the day of the anniversary, we remember everything we have done during these ten years,” he said. “Hundreds of professionals were trained and a large number of research projects implemented. We have done a great amount of work and will continue to move forward together, taking into account the experience and without losing our self-confidence.” Rector congratulated all those who work at sea, who bring up a new generation of seafarers and those who study at the academy and wished them good health, abiding optimism and conquering new professional heights.

“Kherson State Maritime Academy is nowadays a reputable institution with the best training facilities in the Black Sea Basin,” stressed the governor. “Almost six thousand cadets and students from more than 20 countries study here. The academy is also valued as a powerful research center. The anniversary is a pleasant opportunity to mark the high professionalism and dedication of the team to the chosen cause.”

The guests presented the staff of the academy with Certificates of Merit and Acknowledgments and wished the team effective creative work, confidence in the future and new significant achievements. The staff of Kherson State Maritime Academy was awarded with Certificate of Merit of Kherson Regional Council and that of Kherson Mayor. KSMA Student Council was awarded with Acknowledgement of the Chairman of Kherson Regional Council for the civic engagement.

The celebration continued with the ceremony of handing over of seaman’s books to the best cadets of the Academy and Maritime College of KSMA. The seaman’s books were handed over by Head of Kherson Sea Port Authority, harbor master Oleksii Shepetovskyi.

After the line-up, a meeting of KSMA staff and Marlow Navigation representatives took place on the occasion of the 10th anniversary of the institution as an academy.

Boris Ezri, General Director of Marlow Navigation Ukraine, addressed the audience with a welcoming speech. “Thank you for maintaining the high level of training of maritime professionals and respecting the best educational traditions all these years,” he said. “Let the academy continue to increase its creative and scientific potential for the dynamic development of the maritime industry.”

The participants of the meeting watched the video message of Training Director of Marlow Navigation Joern Clodius, who congratulated the employees and cadets on the anniversary.

Boris Ezri presented Marlow Navigation incentive certificates to 100 employees of the Academy, Maritime College and Professional Lyceum of KSMA, who had demonstrated the best results of methodological, organizational, scientific and educational work this year.

For many years in a row, the sponsorship cadet program has been implemented at KSMA. It provides for the selection of cadets of the academy and Maritime College for shipboard practice with subsequent guaranteed employment. Boris Ezri congratulated the 24 best cadets out of 60, who were selected for employment based on results of the first shipboard practice, with a successful start to their careers and handed them personal netbooks equipped with special software for maritime professionals.

At the end of the event, the participants of the meeting took a collective photo in memory.

Congratulations to all those who spared no effort to gain and maintain the high authority of Kherson State Maritime Academy! May each year bring new ideas, vivid impressions, interesting projects and the fruits of inspired work!

Support from the University of Plymouth

KSMA appeal regarding criminal actions of occupation authorities in Kherson

An official appeal to KSMA partners!